The new f/2.8 telephoto zoom in the bag

I’m preparing to take a group of photographers on LuminOdyssey‘s 2013 Botswana trip, and for the first time in a while I’ll be taking a significant new lens: the Sigma 120-300mm/2.8 OS “Sports” telephoto zoom. Over the last few weeks I’ve been preparing my kit, and have been asked a lot about the new lens. So here’s some initial feedback.

But first, some history.

Not my first Sigma lens

I have owned two Sigma lenses in the past. One was my first wide-angle DSLR lens and was very disappointing (I eventually replaced it with the Canon 17-40mm/4 L IS USM, which today is still my workhorse wide-angle lens). I’ve also owned a 180mm macro lens which performed great, until eventually its autofocus system wasn’t compatible with the latest Canon cameras.

I’ve always understood that while Sigma made some great lenses, their quality control wasn’t very good. Better in some models (e.g. macro lenses) but it’s always seemed that the odds of getting a bad copy were higher with Sigma than with manufacturers such as Canon and Nikon. The math-nerd joke is that the standard deviation of their quality has always been a bit high (the standard symbol for standard deviation is the lower-case Greek letter σ: “sigma”).

Sigma’s recent revamp of its new lenses into Art, Contemporary, and Sports ranges promised many advantages for me:

The 120-300mm lens has some particular advantages for me over the previous model:

I had played with the previous version of this lens a year ago, but wasn’t comfortable enough to commit to it.

By the way, in the last week Roger Cicala over at LensRentals.com published two posts regarding this lens, the second of which compares it to the previous model. It’s interesting to see that the internals are very similar, including some of the same parts. But the extra configuration options, the extra sealing and claimed quality control improvements still make me happier with the new model.

The Canon 200-400mm/4+1.4x would give me a longer lens and that would be useful at times, but I learnt a long time ago that no matter how long a lens you have, when photographing wildlife there will always be times you want longer. The trick is to get a reasonable length and then take advantage of it. I’m used to working with a zoom up to 400mm, and am prepared to compromise. I do like the quality of many prime lenses (I own and use a few shorter primes, and have used Canon 300/400/500mm primes in the past) but am often frustrated at the restrictions compared to a zoom.

After a lot of thought, several weeks ago I bought the Sigma 120-300mm lens (no, this post isn’t paid-for advertising!) along with a USB Dock. I bought it locally as I wanted to have access to local Sigma warranty and service if there were any issues, rather than having to deal with third-party repairers (“factory” warranty service removes many opportunities for “the blame game”). Also as it happens I paid less for the lens than I would have buying it overseas, and didn’t have to wait for it. It wasn’t always this way!

But of course there was still a lot I had to find out about this lens for myself.

Physically the lens is very impressive. The rubber coverings of the end of the hood (and the end of the lens itself) are a nice touch. The hood attaches via a bayonet mechanism, and is then held in place with a screw on the side, which normally sits at the bottom. Incidentally, when you tighten this screw it pushes the hood away from the lens (distorting the circular hood slightly to improve the grip). Only a slight tightening is required: no need to go overboard.

While I had hoped that with new composite case materials the new lens would be a bit lighter than the previous 3 kg model, it’s in fact heavier. With the lens hood and with the QR plate mounted (see below) the lens weighs in at around 3.5 kg. While this is a lot heavier than my other lenses: even heavier than the Canon EF 500mm/4 L IS USM, I’ve found it’s quite easy to handle. Part of this may be due to the weight being closer to me than with the longer 500mm lens.

So far I can shoot handheld for long periods, although I do also use the lens with a monopod and a tripod (and it works particularly well with the Wimberley Sidekick gimbal mount). When set up on a gimbal mount I first set the lens to 300mm and then balance the mount so that it will rest in whatever direction I point it with the mount loose. When the lens is zoomed back to 120mm the weight does move slightly forwards, but it’s only a slight change. 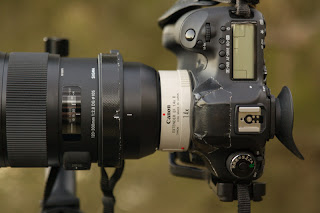 Note that I’m currently using a Canon EF 1.4x Extender II which I already had, rather than buying the Sigma 1.4x APO DG. If Sigma had introduced a new model recently I would have been more tempted to purchase their teleconverter, but the lens is working great  with the 1.4x II so far.

Taking a lesson from Apple?

The side panel which has the AF/MF switches is held on with tiny screws, as one would expect. What I was surprised to see was that these are neither cross-headed screws or 6-pointed Torx, but rather 5-pointed heads like on recent Apple laptops. Of course a matching tool is already in my kit, so if I do need to tighten any screws on the road I won’t be stuck. I once had a lens almost fall apart after days on the rough roads of the Northern Territory but screwed it back together before it was damaged, so I like to be prepared. The tools don’t live in my pocket, but they will be in my bags somewhere.

On the 180mm, 70-200mm, and 100-400mm lenses I’ve used Wimberley P-20 plates. These lenses only have one screw hole, and the “lip” at the rear of the plate stops the plate from twisting when the lens is mounted sideways. The plates are long enough that there’s enough room at the front to mount flashes.

The 120-300mm lens foot has three 1/4″ screw holes for secure mounting to a support, and I’ve used the Jobu Designs NXM lens plate (B&H link) to attach to the front two holes, leaving room for mounting a flash bracket to the front. As you can see, a lip at the rear of the plate would not suit this lens.

The NXM plate is a curious beast. The “stop screws” at the ends of the plate (and those that attach the front cross-bar on the other side) use a 3/32″ hex driver, which is different to the 2mm drivers used for the Wimberley plates. Also the stop screws protrude a lot further than those on Wimberley (and Really Right Stuff) plates, which reduces the range of movement in a clamp (they won’t slide into the spaces allowed for stop screws on many clamps). But the NXM plate is already giving me enough room to balance the rig on my Sidekick.

Another choice would be the Really Right Stuff MPR-1 plate which should have enough room to attach to the third hole, but I don’t think the difference is critical.

The lens ships with a shoulder/neck strap which attaches to the loops on each side of the mounting ring, but I have instead attached connection straps to match the Op/Tech neck straps I use on my cameras, monocular, CP-E4 flash battery pack, etc. When not attached to a neck strap, I usually connect these straps together to form a safety loop through my BlackRapid strap or around the top of my tripod, etc. A little bit of paranoia never hurts.

For transport, the lens fits neatly in my Gura Gear Bataflae 26L backpack, usually detached from a camera body. I can fit the assembled camera/teleconverter/lens in one side of the Bataflae, but only with the hood reversed. Including the hood the entire rig is 48 cm long. Thus when on safari I can’t easily have it assembled but in the bag (away from dust/etc) and ready for immediate access. But that’s OK: polarfleeces make great dust-covers for gear on the seat beside you. 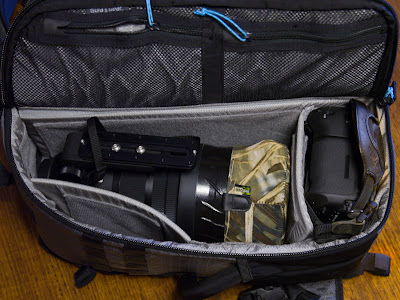 By the way, that’s a LensCoat XL Hoodie on the lens (instead of the monster 105mm Sigma lens cap). It also fits over the other end of the hood in the shooting position, so I don’t need to take the hood off to cover the lens.

When walking around with the lens ready to shoot handheld, I tend to have it hanging from my BlackRapid strap (which is clamped onto the lens plate). Having the lens hanging from the camera body on a traditional strap would be both uncomfortable and would put a lot of strain on both the camera and lens!

It remains to be seen how easy the lens is to handle on pelagic birding trips, which is something I have got very used to doing with my 100-400mm lens.

Using the SOP software and the USB Dock, the lens’s AF can be tweaked at 16 points: the combination of 120/150/200/300mm and four distances. I’ve spent a while testing the lens (using my LensAlign for the close distances) with my EOS 5D Mk3’s AF adjustments zeroed out. 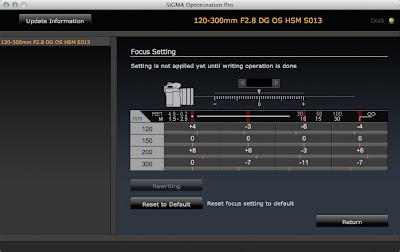 I then checked the focus with my 5D MkII (it didn’t need any in-camera adjustments) and then attached the Canon EF 1.4x Extender II and re-calibrated both bodies in-camera with the “168-420mm” lens (the focus did shift very slightly).

Incidentally, the USB Dock comes with its own USB cable, and of course the cable is different from those used with Canon or Nikon cameras (which use standard “mini-B” and “micro-B” connections). A special cable which you’ll want to keep track of.

But it turns out that it’s the same cable used for Sigma cameras (makes sense) so spares can be tracked down via eBay. Even better for me, it’s the same as the USB cable from my Panasonic Micro Four-Thirds camera (which I use for infrared photography), and because I use card readers I’d never even got the USB cable out of the box before I went looking for it to check. It’s nice to have a backup cable on-hand.

With all of that calibration and testing out of the way, I headed out to do some real-world testing. These aren’t anything special, just some convenient shots nearby to home. Click on the images to view them bigger.

During the calibration I was impressed at how much sharper the images became with slight adjustments in front/back focus, and as a result I think any reviewers who take this lens out for testing without checking and tweaking the lens first, run the risk of not seeing the lens in its best light. Doing all this calibration is a hassle, but I knew what would be involved before I purchased it and now I’m happy that I have an excellent lens. Now it’s up to me to make great images with it!

Of course, I’ve also created Camera Raw Lens Profiles for the lens with and without the 1.4x extender, which allow Lightroom to automatically correct many optical issues including as vignetting. This greatly simplifies my image-processing workflow!

Adobe provide pre-built profiles for most lenses, but not always when combined with extenders, so I’d done this in the past for things like my 70-200mm/4 L IS USM. I may tweak these a little more before we head out.

After we return in mid-July I’ll be able to give better feedback on how the lens performed “under stress”.