It’s true! I’ve now installed SSD drives in many laptop computers, and they’ve all got hotter and noisier. Don’t believe the hype that SSDs are quieter/cooler than normal hard drives. Ok strictly speaking that’s true, but the real world is never that simple…

SSDs (Solid State Drive) are wonderful replacements for some computer hard drives where speed is important. They don’t have any moving parts, and are essentially ultra-high-speed flash drives. Commonly packaged in the same size shell as a hard drive, they can be used as direct replacements. Not only are they physically robust (immune to vibration/shock and to thin atmosphere that will cause normal drives to die) and able to transfer data at over 300 MB/sec (compared to 60 MB/sec with a normal drive on a good day) but because there’re no moving parts they can also handle lots of small operations (>2000 ops/sec vs 300 ops/sec). Often our computers aren’t actually trying to move huge amounts of data around all the time, but having many small operations run quickly can make a huge difference to the overall efficiency of the machine. SSDs are more expensive than spinning drives, but the prices keep coming down. For example recently I’ve bought some 256 GB Crucial SATA-III drives for around $200 each. 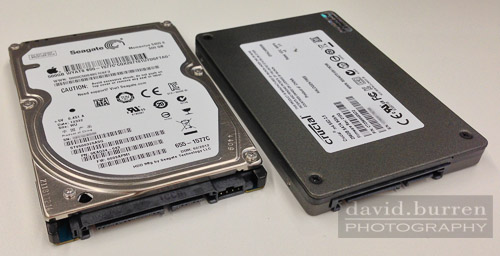 Earlier this year I upgraded the boot drive in my 2010 MacBook Pro to an SSD, and it gave my machine a new lease of life. Almost everything simply runs faster. My MacBook Pro has two internal drives: one is a 240 GB SSD and the other is a 1 TB spinning disk (where the DVD drive was located). It boots off the SSD, and the spinning disk is set aside for photo files, my iTunes library, and sundry other data files. The catalog (database) files for Adobe Lightroom are located on the SSD, which has made many operations on my huge catalogs very snappy.

However while everything runs faster, this introduces a complication: the processors are no longer waiting for the hard drive as much, and can do more work. Unfortunately this means they get hotter, and the cooling fans spend more time running to cool them down. While the drive has got quieter and cooler, the massive speed increase has caused the machine as a whole to get louder and hotter!

I’ve now installed SSDs in many computers, and in the compact ones such as MacBook Pros and Mac minis (which I suppose are already running close to their thermal limits) the fans definitely do spend more time on than they used to. But the speed definitely makes a worthwhile difference to your productivity!

My poor long-suffering wife might have a different opinion though.
At the end of a long day exploring the Umbrian countryside earlier this year, my MacBook Pro was busy stitching together eleven 5D MkII files into a panorama of Assisi using Photoshop CS6, and the fans soon kicked in. After a while I put the machine aside and turned off the lights: I could check the file in the morning. We were all tired, and sleep was beckoning. Then a voice in the darkness asked: “How long is that going to be making that noise?”
Luckily, not long. It finished work soon after and the fans turned off.