Can you see the sea-dragon rising from the deep? The eye, the teeth, the snout, the horns? It was taken on my first Antarctic voyage, and serves as an example of the constantly-changing scenery encountered from a moving ship. Let me describe… 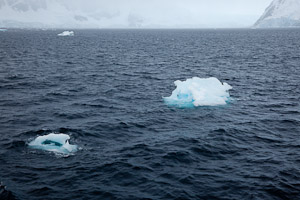 We were sailing through the Lemaire Channel when I saw this scene: just some small pieces of ice floating in the water. They were fairly weathered, and were obviously parts of larger icebergs that had slowly melted and formed quite irregular shapes. But the ship was steadily sailing along, and the ice was going to pass us on our left. Something about them caught my eye, and I grabbed my other camera (with a telephoto lens) to see what I could find.

As the ship passed the ice, weird shapes gradually emerged. Each of these shots is 1-2 seconds apart. Not only was the ship moving relative to the ice, the ice was gently bobbing up and down in the waves. Eventually the image at the start of this post appeared!

I knew I had something interesting, and although I kept tracking the ice through the lens for a short while didn’t take any further shots of it. In hindsight it might have been interesting for this example to have done so, but hindsight is always a wonderful thing…

Everyone expects wildlife to move, and when photographing it we usually expect to take lots of photos. But when working from a moving ship your landscapes also move and are constantly changing. Combine that with stunning scenery and long days, and you might understand how it’s possible to make thousands of photos in a single day (and not have to throw most of them away).