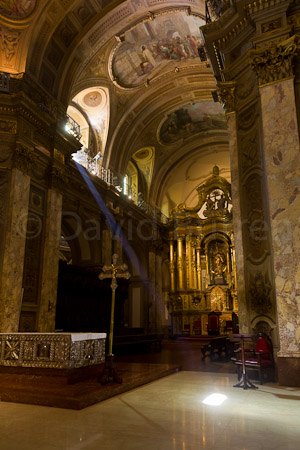 Like the image I showed several days ago, this image was made inside the National Cathedral in Buenos Aires. In fact, it was made from almost the same location within the building. But rather than looking across, it looks towards the altar. The beam of light immediately caught our attention, and I think we each experimented with different approaches to capturing it.

My position here was chosen with several competing concerns in mind. Mainly I wanted to highlight the faint beam against a dark background, but I was also conscious that I didn’t want to be obtrusive and disrespectful to the people praying in the pews nearby. Here I found a position where I was hidden from them by a large pillar (the same one providing the reflection in the earlier shot) and the beam against a suitable background.

If I was using a shift lens (such as one of Canon’s TS-E models) I would have moved lower to increase the contrast between the beam and the background, but I remember one of the issues in my mind was the converging vertical lines that were accentuated by tilting the camera upwards. Shifting the lens up instead would have solved that issue but I knew that the higher I was the less tilt I would need. I experimented with kneeling down, but the distortion when I tried to include the ceiling from there was very noticeable.

As with most of my photographs, the image you see here has been rendered directly from the RAW file by Lightroom. I’ve tweaked the Exposure, Fill Light, and Brightness sliders, and applied a slight amount of perspective correction, but not a lot else. 1/20s, f/4, ISO 1600 @ 24mm. The slow shutter speed was a challenge, but at 24mm with IS on (and leaning against a pillar) the image came out sharp enough.