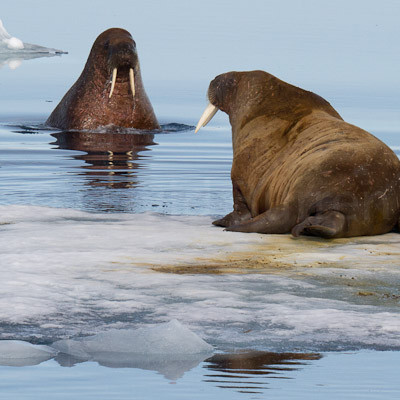 Just for a change in pace, here’s one of the many images I made in July this year while leading a LuminOdyssey photography group around Svalbard in the high Arctic.

We were travelling on Aurora Expeditions‘ Polar Pioneer, an ice-strengthened expedition ship. She’s often described as “one rating down from an ice-breaker”: in other words she can cut through ice, but not through solid ice fields. At this stage (around midday, although the light didn’t change dramatically through the 24-hours of daylight!)  we were slowly proceeding along a channel with scattered ice. Many of us were out on deck scouring the ice in search of polar bears. But when other wildlife appeared we didn’t ignore it!

Three young Walrus were lounging on an ice floe, but one of them panicked as we got close, and slipped into the water. I kept my camera trained on them and grabbed this image as it popped up again out of the water to check on us. The other Walrus didn’t bother moving much. As you can see from the colour of the ice, they hadn’t moved in a while…

For those interested in the technical side of the image, I was using an EOS 7D and the EF 70-200mm/4 L IS USM lens paired with an EF 1.4x Extender II. Obviously I’ve cropped it slightly to frame the composition I had in mind. To avoid unexpected exposure changes as I framed different subjects, the camera was on manual exposure (in this case, 1/1000s @ f/9, ISO 400). I quite like the combination of this lens and the extender, although there’s no ACR lens profile available and thus I need to tweak some of the lens adjustments by hand. If I get a chance I may generate my own profile, as I’ve been using this combination quite a lot recently.