Photographers! Take care of your tripods!

David Burren July 2, 2011 March 4, 2016
Recently I helped one of my friends buy a used carbon-fibre tripod. Because it was local to me I was able to inspect it for them pre-purchase. This tripod (a Feisol CT-3442) had had little use since it was bought new last year and taken on last November’s Odyssey to South Georgia and Antarctica, so I had some idea of how it had been treated. Overall it was in great condition, but I was surprised by the amount of grit in the lower joints. This had started to make slight scratches on the lower leg sections. I ended up disassembling and cleaning the tripod before posting it to my friend, and I’m confident it has a long and productive life ahead of it. But it’s a reminder that all photographers should take good care of their gear, and clean it regularly. 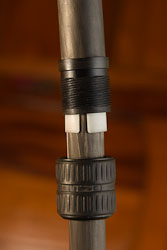 Cleaning tripod joints is quite easy. The exact procedures depend on the design, but the concept is the same. Loosen the joint enough that the whole leg section comes away, take it apart and wipe everything down (if you manage to leave the grease on any exposed threads you can avoid having to re-grease them with the right lubricant, so don’t put them down in the dirt!) and then reassemble.

The twist joints as used on the Gitzo and Feisol tripods have some plastic bushings inside which you need to clean and then replace in the right order, so take careful notes when you’re removing them! The Feisol ones have sets of plastic rings in each joint as well: pay attention!

The latches such as those on some Manfrotto tripods often have an extra bolt that needs to be loosened to allow the joint to come away from the outer/upper section (you need tools to do this, unlike the twist joints). Reassembling these can involve a bit of fine-tuning to get the tension of the latch to where you like it, but it’s worthwhile.

Because we often don’t extend the tripod legs completely (unless we’re very tall and/or the tripod is relatively short) it’s often tempting to leave the lower leg sections until last when setting up the tripod. There’s certainly a little truth to the story that the lower leg sections are the least stable (they’re thinner, after all) than the upper ones, but if that lowest joint ends up sitting in the mud you’re making more maintenance work for yourself (or if you don’t clean them: shortening the life of your equipment).

I don’t think this issue with cleaning is specific to this brand or model. I have a small Feisol CT-3402 which I use as my “travel” tripod, a large Gitzo GT3541XLS which is my “workhorse” tripod (it’s a pleasure to work with!) and an old Manfrotto aluminium monopod. They all occasionally get cleaned like this, especially after “extreme” outings. However the Gitzo “G-Lock” joints do have fewer components and this does help both in keeping them dirt-free and in cleaning them.

Incidentally my monopod/tripods all have “4-section” legs, mainly to reduce the size of the collapsed device and make it easier to transport. Over the years I have developed the habit of usually extending the lower leg section even if only by a few centimetres, and I’m sure this has helped reduce the amount of mud/poo/water/salt/sand the joints have been exposed to. When possible I also try to wipe down the legs before collapsing them, as I’m conscious that whatever’s on there will be drawn up through the joints.

If I’ve been using my tripod at the coast or in a river and the water level’s been above the joints, then it’s likely that water and other contaminants has got inside. This doesn’t stop me using the tripod in those conditions, but it does mean I try to clean it as soon as possible afterwards!

Why was this friend keen on getting a tripod? Possibly because I carry and use one a lot, but also because last month while I was teaching a class near the Hunter Valley we stayed up late and took star-trail photos. That’s pretty hard to do without a tripod (those nights they borrowed my CT-3402).

Actually, that time we didn’t have a lot of success because of clouds blowing across the sky (giving the trails a “dashed” appearance) but the previous weekend on my Travel Photography workshop in Gippsland (yes, there was a bit of travel last month) we managed a few, including this: 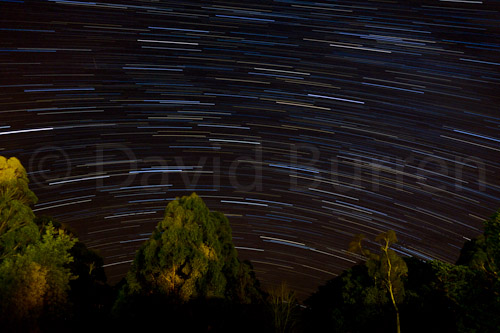 Star trails (A2_076501)
The trees are lit by nearby streetlights: this was taken from the lawn outside our accommodation.
These trails are only about 40 minutes long. 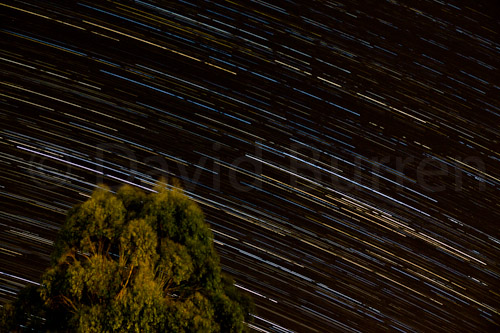