David Burren July 1, 2011 March 5, 2016
Recent firmware updates from Canon (check out the appropriate model at Canon’s websites and look in the Downloads or Drivers & Software sections) for several cameras promise to “Improve the writing/reading speeds when using UDMA 7-compatible CF cards”. Having earlier published some speed results for the EOS 7D and 5DmkII cameras (my workhorse bodies) it was an obvious step for me to re-test after updating. 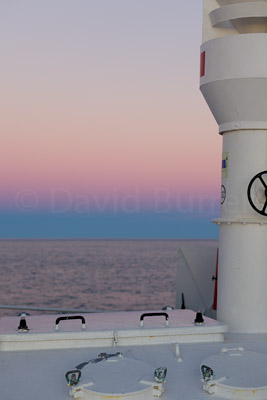 The Belt of Venus
Dusk off the coast of Patagonia (A2_074532)
The end result? Na-da. No noticeable change in speed with my cards.

This isn’t really surprising, as I have no UDMA 7 cards. The only such card I’m aware of is the 128 GB SanDisk Extreme Pro (advertised as a “100 MB/s” card). Given that B&H [affiliate link] currently sells this card for US$1150, I don’t think this is an issue I have to worry about just yet.

In any case, I gather from some fine print at one of Canon USA’s sites that these cards won’t be significantly faster than my current cards:

With these updates, the 1D Mark IV’s and 5D Mark II’s card-writing speed for UDMA 7 CF cards is about 3.3 times faster than it was with earlier firmware versions. However, even with the new firmware, the cameras’ card-writing speed is about the same for both UDMA 7 and UDMA 6 CF cards.