David Burren August 27, 2010 March 5, 2016
I’m not writing here about physical “things” (although sensible names there are important too!). I’m referring to the names we give objects in our digital image processing tools. Not so much the names of image files, but rather things like software presets/templates, actions, layers, etc.
My fundamental guideline:
Names should be concise and tell you what the thing does, rather than how it does it, or what sort of thing it is.
Some examples:
Photoshop layers 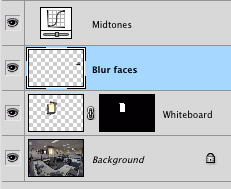 When you create a new layer in Photoshop by default it is named something like “Layer 1“, while a new Curves adjustment layer might be called “Curves 1“. You might end up with a Photoshop masterpiece that has a layer with dust-spot removal (mostly transparent with just some spots fixed), another with acne retouching, a curve layer to add contrast, and so on for a total of 10 or so layers. If you don’t give the layers sensible names, when you come back to work on the file in the future it’s likely that you’ll have to spend time experimenting (e.g. turning layers off and on) to remember what each one does. In the above example names such as “spot removal”, “acne”, and “add contrast” will make your life easier!
If you’re doing sharpening with a stamped layer on the top of the layer stack, with its blending mode set to Luminosity and an Unsharp Mask filter applied to it, I’d at least set the layer name to something that reminds you that its purpose is sharpening (and probably include the USM settings used). Using Smart Objects (where the USM filter would become a “smart filter” and thus record the settings used) I’d still set the name to something about “sharpening”.
Filename templates

In Lightroom you might define a Filename Template to use in renaming image files when importing onto your system. These templates are the concatenation of name elements, including things such as date information recorded by the camera for each file. I’m a strong believer in renaming files as their imported so that they will have unique names that will not “collide” with past or future files in your collection, and these Filename Templates make this easy.
Some people use import naming templates that use a sequence number field to keep each filename unique, although this can run into problems if you import photos on multiple computers (e.g. a desktop and a laptop) and later consolidate the files. 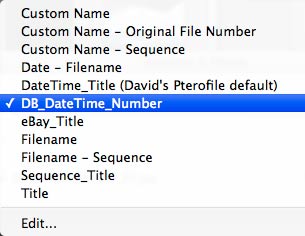 The name of your template should briefly tell you what it does, not something generic like “My default“. When you’re presented with a menu of all the templates you have defined, you should be able to decide which you want without having to choose/edit each one and check what it does.
Not only could “My default” cause issues when you decide to use a new default for importing, but these Filename Templates are also used by Lightroom for renaming files and when naming exported files. You probably don’t want to name your exported files to send to a stock library using the same system as you used on import. Firstly the files already have that name, and secondly the stock library probably has its own preferred naming format.
Some people will prefer template names such as “Import filenames” (used when importing), “Flickr filenames” (for uploads to Flickr), “Email filenames“, etc. If the name of your preferred import format is “DateTime_Number“, I think it would be reasonable to add “ (import files)” to the end of that name to remind you what you use it for, but it can help to keep the root of the name consistent with the way you’ve named the rest of your filename templates.
Metadata templates
In Bridge and Lightroom you might define Metadata Templates/Presets so you can quickly assign Creator/Copyright/Location information to large groups of images (as they’re being imported for example). Again, something like “My default” is not very useful.
For example, I have my Creator information which I apply to every image. This contains both my name and some way for people to contact me. However while on trips with my wife I’m often importing and backing up her photos as well, so I have different templates with her Creator information. If this was all I had in my templates, I might have one called “David” and one called “Jane“.
On each photo I also set the Copyright Status to Copyrighted, and set the Copyright string to something like “© David Burren 2010” (so that it’s the “proper” notice of copyright: see The Copyright Council of Australia’s website for further details). Because this contains the year (it’s supposed to be the year of first publication, but as a failsafe I use the year of creation) I’ll need to remember to update it next year. So I have a template called “David 2010” (containing both my Creator and Copyright information) in order to make it obvious in January that I should define an updated template. I do eventually remove the templates from previous years of course. 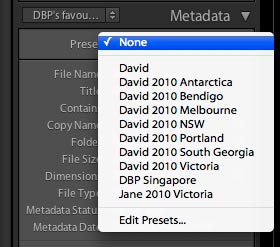 The other information I try to set on every photo is location. There are four main fields to this: Country, State/Province, City, Location (see dpbestflow.org for further explanations). While many of my images are GPS-encoded, having the location names here is very useful, even if just for use in searches through my image library. If I’m repeatedly importing cards full of images taken in Richmond (in Victoria, Australia) I’ll probably have a template called “David 2010 Richmond” which contains my Creator info, my 2010 Copyright info, City=”Richmond”, State=”Victoria”, and Country=”Australia”. I’ll manually fill in the Location field with things like the appropriate building or park names.
I also have a template called “David 2010 Victoria” which leaves the City field blank. If I import a card of images taken in various locations around the state I can use this to set most of the fields, then in Lightroom (or Bridge) I can select blocks of images and I only have to set the appropriate City/Location values.
So right now I have “David 2010 Bendigo“, “David 2010 Melbourne“, “David 2010 Portland“, “David 2010 Victoria“, “David 2010 NSW“, “David 2010 Antarctica“, “David 2010 South Georgia“, “David 2010 Argentina“, and “Jane 2010 Victoria“. Looking at the list of templates I’m immediately able to decide which one is most appropriate, without having to examine their contents.
During the rest of the year I’ll probably define new ones, and when I know I’m not going to need a template any more (because its data has already been applied to all the relevant photos/videos) I’ll remove it.
The same ideas are applicable to naming Photoshop actions along with many other processing tools. The important factor you’re thinking about when you’re selecting an object is “What does it do?”, so the names should help you remember. Sometimes it’s based on what task you use it for (e.g. “sharpening” and “Flickr filenames“) while sometimes it’s more useful to also include a summary of what it does (e.g. “DateTime_Number“).
While you’re creating and experimenting with the objects you might not initially know the best final name, but you should go back and rename the object appropriately ASAP. It will make your digital life easier!