How many photos do you take in a day?

David Burren September 18, 2009 March 4, 2016
As photographers we each shoot at different rates. Some of us will head out for an afternoon’s shooting and be happy we came back with 30 photos. Some of us will have more than that simply because we shot bracketed frames for later HDR (High Dynamic Range) merging.
But that tends to pale into insignificance when compare to people shooting action. Sports or wildlife, it usually involves shooting bursts of action. For some people that involves holding down the shutter button and “spraying”, while for others it just involves shooting lots of individual frames as the composition they can see through the lens changes.
But people in each of these camps sometimes have trouble comprehending how other people can shoot so much (or so little). For example some people (especially some who started working with film where the cost of each frame was significant) say that people who shoot thousands of frames a day can’t be putting much thought into their pictures (the phrase “Spray and Pray” is sometimes used). But things aren’t always that simple…
This came to light recently in a post on The Online Photographer where people started discussing how many frames Thom Hogan took per day on a recent African expedition. Concurrently with this I heard from people reacting to my descriptions of my busiest day on last summer’s Antarctic trip.
I can point to examples in my own history where I’ve: shot thousands of frames in a day’s work at airshows, 1000-2000 photos per day on the Serengeti Plain in east Africa, and 3000+ photos in a single day’s shooting in Antarctica. But I don’t always shoot that much. Sometimes it’s less than 50 photos per day (even less if I’m not actually out photographing!). In Africa and often in central Australia I often find myself travelling vast distances without taking many photographs at all.
But 3000 photos in a single day? Reactions I hear when I tell people this include: “Did you ever look at the scenery without a camera to your eye?”, and “Did you stop to eat?” (the answer to each of those is “Yes”).
If I shot one photo every 15 seconds for 12 hours I’d only have 2880 photos, so maybe I took one photo every 14 seconds? No, the days and photography don’t usually pan out that way. 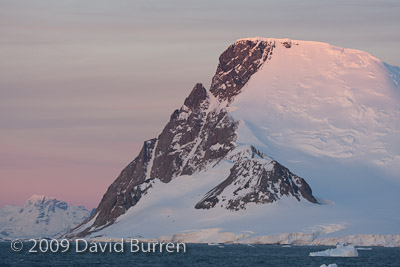 0030 hours
Neny Fjord, Antarctica
EOS 40D, 100-400mm @120mm (A2_010367)
In the deep south in a season when the sun only set for an hour or so, there’s way more than 12 hours of shooting time available. The days sometimes started around 6AM and finished after 1AM (a major issue is finding enough time to sleep: one time we got woken up in the middle of the night by an announcement over the P.A. telling us that the light on the mountains was amazing and we should come outside to photograph it, and all I could do was lift the blind on our window to see that yes it was indeed beautiful, then roll over and go back to sleep: there are limits to human endurance).
During the day there’d always be times I wasn’t photographing. When sleeping, eating (although mealtimes are sometimes interrupted by whales/etc), talking to friends, checking through recent photos on the laptop, and just simply watching the wonderful views. Photography was very sporadic. But it was one of the primary purposes of the trip.
By the way, I do photograph on the open ocean: usually pelagic birds such as albatrosses and petrels following the ship. Usually not for hours on end though, as tracking the birds with a telephoto lens while maintaining my balance and still managing to get pleasing compositions does get very tiring after a while! On the Antarctic voyage most of the photography happened amongst the scenery of the Antarctic Peninsula.
When wildlife appears there are lots of photos to take: the animals never stay in the same position for long, and if you’re on a moving vehicle your own perspective keeps changing. Sometimes it’s a photo every second or so, sometimes it’s 6 fps, sometimes it’s nothing while you look for the next opportunity. This applies when watching penguins from a Zodiac, elephants in a wallow from a Land Rover, or watching birds at their perches.
That issue about your position and perspective changing on a moving vehicle also affects landscape/seascape photography. On that 3000+ photo day, when traversing the length of the Lemaire Channel in Antarctica (a trip that takes just a bit over an hour) I spent most of it on the external observation deck of our ship, with two cameras around my neck (one with a wide-angle lens, one with a telephoto zoom). The weather was grey and overcast (with occasional drizzle), the cold wind was biting, but I was in heaven! 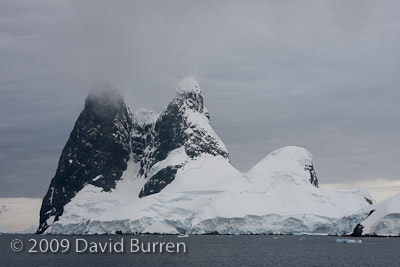 Una’s Tits touching the clouds
Lemaire Channel, Antarctica
EOS 40D, 24-105mm/4 @47mm (A2_014597)
The scenery was amazing, and constantly changing. Fjords would open up beside the channel, and new vistas would appear and disappear. Almost everywhere I looked there was a new amazing scene to capture. If I wasn’t wearing a balaclava to keep the wind off, the huge grin on my face would have been hard to miss.

Sunset through the gap
Lemaire Channel, Antarctica
EOS 40D, 24-105mm/4 @85mm (A2_014593)
During that transit of the Lemaire I did go inside every now and then to rest, but not for long. Incidentally, the above two photos were taken only 30 seconds apart. Here’s a wider shot to put them in context: 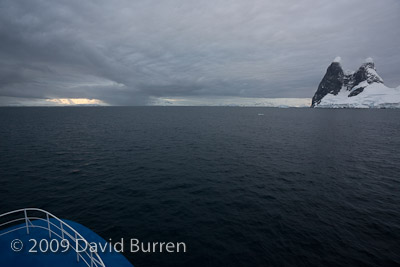 That photo was taken at 10pm under heavy cloud: by then both cameras were working at ISO 800 in order to be able to maintain a fast enough shutter to cope with the moving ship. And that wasn’t even the end of the day: a while later we ran into a large pod of Orca! 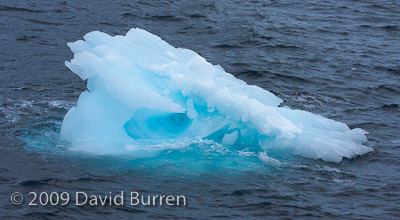 This was just a piece of ice floating in the ocean, but as the ship sailed past it all lined up and this zoomorphic image appeared for split second. If I hadn’t had the camera already pointed at the ice, if I’d even noticed the scene at all it would have been gone by the time I took a photo.
As it happened, I’d noticed an unusual-looking iceberg about 15 seconds before, and explored it with the cameras as we passed it. Each of these photos is about 1 second apart. By this time I knew what I wanted to capture, and the above image was made several seconds later.
So a number of the photos I took didn’t end up as amazing photos by themselves, but if I’m glad I took them regardless.
How many Gigabytes?
One of the things I gave a lot of thought to before heading off for a month’s travel (1 week in each of Argentina and Easter Island, and 2 weeks in Antarctica) was making sure that I was going to have enough storage for my photo, video, and audio files. There was a bit of crystal-ball-gazing going on: I didn’t know how many photos I was going to average per day, but in the end I took enough for 500 GB of files (times two, as everything had to be backed up). By the time I got back I had only used around 330 GB, so that worked out well. That was over 12000 images (plus some video and audio files). I was editing and sorting my images during the trip, so that’s not counting the thousands of images I deleted during the month (for example, editing and keywording images using Lightroom on a laptop seems like fairly efficient use of the time spent waiting in airports).
As you might guess, this also has some bearing on the perennial question of “what size card should I use?”. If you’re shooting with an EOS 5DmkII and 2GB cards, you’ll only have room for around 70 photos per card. For me this is on the small side when shooting action: so I tend to use larger 4GB, 8GB, and even 16GB cards. If you’re shooting with an EOS 40D you’ll get almost twice as many per card.
Some people worry about how many gigabytes they have on each card, but I usually think of it in terms of how many photos. They’re usually soon backed up to multiple hard drives anyway.