David Burren May 1, 2008 March 5, 2016
As photographers build up larger and larger collections of images, having systems and software to organise and track them becomes essential. Whether you use Adobe Bridge, Adobe Photoshop Lightroom, Apple Aperture, iView MediaPro, Microsoft Expression Media, Extensis Portfolio, iMatch, or a combination of these and other management software, the metadata we can attach to each image is one of the building blocks of these systems.

Warning: this article is intended for photographers.
If you’re not interested in the digital tools and procedures used by photographers to manage their images, your eyes may glaze over…

Digital cameras attach information about the exposure, geo-coding software can attach GPS coordinates, and we can attach lots of information such as keywords, captions, ratings, location, copyright, and photographer contact details. As well as being used to help you organise your images, the metadata can be transferred with the image files sent to customers and to stock libraries, be used when building web galleries, etc.
I must admit that when I started out working with metadata for photo files I struggled a bit with where to put the captions and descriptions. It doesn’t help that some of the metadata fields have different names in different software!
The three metadata fields I’m going to talk about here are:
Faced with these fields, new users can get confused about where to put image captions. Today I find many of my students start off making the same mistakes I did, and I can’t helping thinking that they can’t be alone! Often they end up putting a caption in the Title field, and/or ignoring the Headline field altogether. 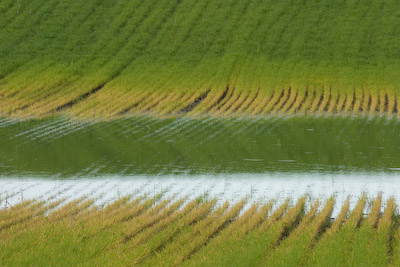 Fertile Grooves, South Australia
When you get enthused and start populating the metadata you should spend your time wisely: fill in the right fields, and avoid having to change everything again later when you start sharing your files with others (e.g. submitting to stock libraries). So here’s “the skinny” on these fields, quoted from the “IPTC Core” schema:

Headline
A headline is a brief publishable synopsis/summary of the contents of the photograph.
The Headline term should not be confused with the Title term.
Description
The Description field, often referred to as a “caption” is used to describe the who, what and why of what is happening in the photograph. If there is a person or people in the image, this caption might include their names, and/or their role in the action that is taking place.If the image is of a location, then it should give information regarding the location.
Don’t forget to also include this same “geographical” information in the Image panel (location, city, state/province, country) of the IPTC Core. The amount of detail you include will depend on the image and whether the image is documentary or conceptual. Typically, editorial images come with complete caption text, while advertising images may not.
Title
This field can be used as a shorthand reference for the image or “photograph” – primarily for identification. The title of an image may take several forms; for photographers this might be the filename of their original scan or digital camera file, for news organizations it might be the name of the story for which it’s to be used.
The Title term should not be confused with the Headline term, which is a short synopsis of the content of the photograph.

The standards are clear: don’t put a descriptive phrase in the Title field!
It’s a simple rule: don’t forget it.
Example 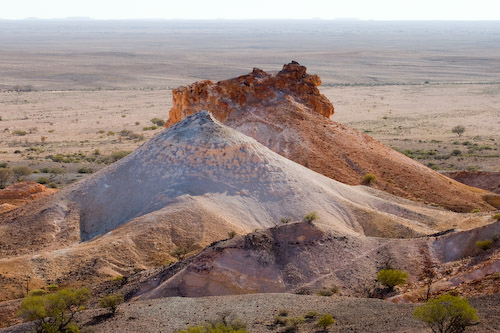 Headline: Ungkata
Title: F1_2977
Caption: The Bearded Dragon (Ungkata) is one of the formations in the Breakaways Reserve near Coober Pedy in S.A.
In this example the string “F1_2977” is the image ID allocated by my database, and allows me to track any derivative versions of the image in my collection. Some photographers populate the Title field with the original camera filename, while many leave it blank.
Whatever system you follow, the point of this article is just that you shouldn’t use this field for caption information.
Photoshop Lightroom
Adobe Lightroom’s default metadata panels in the Library module don’t help the issue though: the “All” choice shows the Title and Caption fields together, with the Headline field buried much further down the list:

The “Default” choice doesn’t show the Headline field at all! 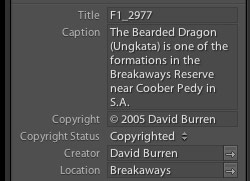 Faced with empty Title and Caption fields, it’s easy for new users to be tempted to mis-use the Title field.
However Lightroom is very configurable, and you can define your own panels (“Metadata Field Lists” in Lightroom’s terminology). You can’t do this through Lightroom itself, but all you need to do is put the right config files in the appropriate folder and restart Lightroom.
Rather than use the “All” panel (which shows some fields I never use) I’ve defined a panel which only shows the fields I’m likely to use, and places the fields in what seems like a sensible order: 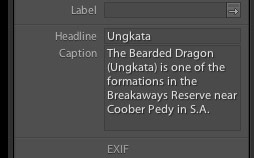 I’ve given it the label “The Usual Suspects”, and you can download it to install on your computer. This works with both Lightroom v1 and v2.
In the same area as your install’s presets folders (use the “Show Lightroom Presets Folder…” button in Lightroom’s Presets Preferences window) create a folder called “Metadata Field Lists” and put “The Usual Suspects.lrtemplate” in it.

After restarting Lightroom, you should see a new selection in the Metadata pull-down: 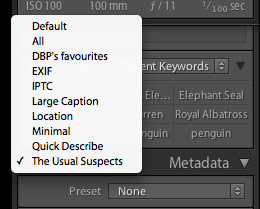 Remember, this panel doesn’t define new metadata fields, it just shows you the standard fields in a different order. At any point you can switch back to the “All” field to see where your data has gone. I’ve made this panel reasonably generic, and it seems to cover the fields that most users will be interested in filling out.
I hope you find it useful!
If you want to define your own panels, you could learn how to manipulate the .lrtemplate files by hand, or you could simply explore Jeffrey Friedl’s Lightroom Metadata-Viewer Preset Builder.
Web Galleries
If you use the “Lightroom Flash Gallery” or “Lightroom HTML Gallery” web galleries in Lightroom’s Web module, you’ll probably want to change the details of the “Image Info” panel.
There are two lines of text you can put onto each image page: the first one is currently called “Title” and defaults to using the image’s “Title” metadata field, while the second is called “Caption” and defaults to using the image’s “Caption” metadata field.
Most users will want to modify the “Title” info field to instead use “Headline” (in my own galleries I tend to use a more-complex layout using both Headline and Title so we get both the description and the image “serial number”).
Personally I think this would be less confusing for new users if the “Image Info” fields were called something other than “Title” and “Caption”, and hopefully Adobe will change this in a future update. But even as it is, you can easily redefine which metadata fields are used in each info field.
Good luck, and Happy Annotating!