David Burren June 16, 2006 March 5, 2016
I use all my cameras in RAW mode, and the files they produce range from 8 to 16 MB each. When photographing static subjects such as landscapes the number of images I take are a lot less than the number I take when photographing wildlife, where the compositions constantly change, and the opportunities are fleeting. On my home system I have a setup with multiple Firewire and USB hard disks, with copies of everything on offline disks. But how do you manage all those files when away from home?

If you’re on a day-trip from home you can often avoid the problem by having enough card storage that you can last a day without downloading, but on longer and busier trips you need somewhere to offload the files to. “PSD”s (Portable Storage Devices) containing a 2.5” laptop hard disk, a card reader, a battery, and a USB interface to connect to a computer for later download are a familiar site these days. There are lots of choices in the market, each with different features. For example the Epson P-2000 (and 4000/4500) have a large screen for reviewing images.
The Nexto PSD
The device I use is a Nexto CF ND-2500, which has a very simple interface. A small text LCD displays download status, and single button (with long and short presses having different meanings depending on the screen menu). It only has a CompactFlash card slot, so to read other card formats an adaptor is required. To read SD cards I use a Mittoni adaptor, which is the size of a CF-II card and thus isn’t as unwieldy as some of the “5-in-1” adaptors on the market. One of the attractive features of the Nexto for me is the fact that it is fast: a full 2GB SanDisk Extreme III card can be downloaded in about 3 minutes. Faster downloads mean less time with the disk spinning, which means both less risk of bumps damaging the drive and less power being consumed (and thus longer battery life). It has both USB2 and Firewire interfaces (and when connected by Firewire it doesn’t have to use the internal battery). It can be charged from a 12V lead either from a car or an AC adaptor (or by Firewire if the unit is not running). Together, these features made it a compelling choice when looking to upgrade my previous CompactDrive PD7X.
The Nexto has an internal 600 mAh Lithium-polymer battery, and although this can’t be swapped with a spare, the unit does have a connection for a secondary Li-Ion battery (seen here attached to the side of the unit). There are at least two versions of this going around: 1800 mAh and 2200 mAh. With the battery attached the unit runs off both batteries, and this is enough power to cope with most outings.
However on a recent trip through Kenya and Tanzania I was using several cameras, and between them had three 2GB CF cards, one 1GB, and one 512MB, while my wife had two 1GB Ultra II SD cards for her camera. With lots of wildlife opportunities, it wasn’t unusual for us to be filling all those cards in a day. This was fine, but a complication came in the form of us being away from recharging facilities for 4 days at a time. Also, not all of these CF and SD cards were as fast as the Extreme III CF: some of them were almost twice as slow. With the constant downloading, and the daily connection to a laptop to mirror the new files to a backup drive (which in the end sometimes had to be done using USB due to a cable fault!) this
stretched the Nexto’s battery capacity. We came through OK with all our files intact, but on my return home I decided to implement a solution I’d been considering for a while.
Extra power for the Nexto

The Li-Ion battery of the Nexto is the same voltage (7.4V) as the batteries used by many of today’s digital cameras. The BP-511 batteries used by most of my Canon cameras range in rated capacity from 1100 to 1400 mAh, and last a long time. For instance on that African trip my EOS 30D would typically go for two days on a single BP-511A, with lots of photos being taken, with lenses drawing extra power for the IS function. I had plenty of spare camera batteries, but in the end they were overkill. Finding a way to connect them to the Nexto would provide a very flexible solution.
Here you can see a common third-party Li-Ion charger, with interchangeable plates to allow the charging of many different battery models. I considered modifying the charger itself to allow the use of various adaptor plates unmodified, but then I would have to cope with the plates/batteries that have different voltages, and the cost (and size) would be greater. Given the number of BP-511-style batteries I have, I bought a spare BP-511 plate at my local camera store. 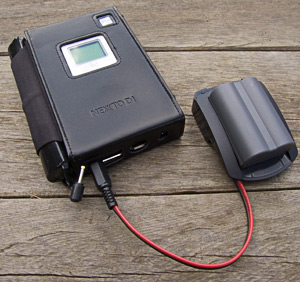 Then I opened up the plate (simply two screws on the underside) and removed the internal wiring (including the contacts on the base to attach to the charger) and cut off the protruding plastic clips on the underside. The addition of some wire and a DC power connector (1.3mm internal diameter, 3.5mm external, 9.5mm shaft length) and a bit of soldering, and I had my solution.
As you can see it’s a quite small setup, easily kept in the bottom of a camera bag as a backup. It doesn’t have quite the mAh rating of the Nexto’s secondary battery, but it’s easy to pop in a spare battery. There’s little risk I’ll ever run out of power for my image downloads!
All up it cost me about AU$12 ($10 of which was for the charger plate).
August 2008: I’ve got a new article about a replacement for the ND-2500. The 2500 is still a great device but if you need more space, more speed, and SDHC backups you can do even
better. Check it out.